My guest on this show, Dan Rogers, created a firestorm online with his article, “’And that’s okay:’ Not all volunteers want to operate like FDNY.”

Here’s a quote from the article, which appears on the FireRescue1.com website:

“We often try to ‘push’ pride in our department onto the younger members. But many of them weren’t raised with the same sense of community as we were, so they will likely never carry that pride. And that’s OK.”

Readers, as they always do, came to different conclusions about what Dan was saying.

One commenter said, “…those joining a volunteer fire department should be told what’s expected of them. There’s a minimum standard, what drills/trainings are expected, how many calls are expected from them. A fire service is a para-military organization, not the Girl Scouts. Do the job or quit.”

A reader responded, “Not sure the size of your agency, but for many rural departments if you require all members to be all in all the time without spending time with hobbies and family, you’ll likely have a [smaller] membership.”

Another said, “We are no longer, or should no longer be the fraternity that is exclusive to certain members of the community who meet at the fire hall and have a card and beer party, those days are long gone!” 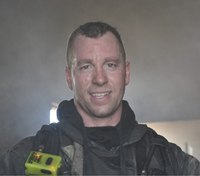 So…what did Dan Rogers really mean in his commentary? I found out this week.

Dan is a third-generation firefighter.

Dan’s article: ‘And that’s OK’: Not all volunteers want to operate like FDNY

Previous Post: What Fuel Are You Using in Your Burn Building? with Jack Regan
Next Post: Managing Your Promotion with Ian Emmons