Let’s say you wanted to become a company officer. In your interview, you probably told them it was because you felt your leadership could help the department, and you meant it.

Even if you also felt that a promotion would give you a raise. Or more prestige. But if those were your real reasons for wanting the job, you’re headed for trouble.

Here to explain why and what a company officer really needs to know and do is Kelly Lemmons. 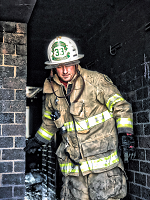 Kelly is the Deputy Chief of the Colonial Park Fire Company in Harrisburg, Pennsylvania. He is also a firefighter/EMT for the Defense Logistics Agency.

He’s served over 19 years in the Pennsylvania Army National Guard, and is a Staff Sergeant serving as an Infantry Advance Leaders Course Instructor.

And he was awarded the Purple Heart after being injured in combat in Iraq in 2005.

Kelly’s article: Company Officer Leadership: When in charge, be in charge – but it’s not about you

Article: The 10 Commandments of a Great Company Officer

Previous Post: Reflections on 19 Heroes
Next Post: A Firefighter’s Life is the Same Everywhere with Ulrich Koellner