It was a normal evening for the crew of Colerain, Ohio Township’s Engine 26. The guys were cleaning up after dinner.

Then the dispatcher interrupted them with a call to a structure fire.

When they arrived on scene, the crew found a single-family residence with flames showing. Police said there might be someone trapped inside. 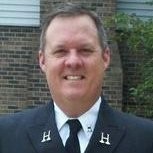 Lt. Steve Conn and a rookie partner made entry and began to search.

Minutes later, Steve found himself in a world of trouble.

What happened next taught him a lot about dealing with mayday situations and their aftermath.

Steve Conn is a battalion chief and a public information officer for the Colerain Township, Ohio, Department of Fire and EMS where he has served for over 30 years.

He is also a registered nurse with 30 years of experience in interventional cardiology.

Previous Post: What happens to you if Qualified Immunity goes away? | Guest: Brad Pinsky
Next Post: Is This What You Signed Up For? with Bob Horton