Battalion Chief Abby Bolt was a 22-year veteran firefighter in the US Forest Service.

She quit last month, posting a version of her resignation letter on the internet.

In it, she says a “toxic dynamic of leadership, which made my job, which was my life, a complete misery” was to blame. 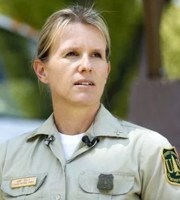 Abby said the usual response to her repeated complaints about bullying and other mistreatment was that she could leave if she didn’t like it.

After she filed a gender discrimination complaint in 2014, that harassment increased, she said. Anonymous notes began to show up in her mailbox, telling her that she was an example of why women didn’t belong in firefighting.

An investigation by management went nowhere.

Some people may find it hard to believe that this behavior still goes on, but, at least in the US Forest Service, it apparently does.

Article: They reported sexual harassment. Then the retaliation began