On June 30, 2013, the 20-man Granite Mountain Interagency Hotshot Crew was dispatched to respond from its base at Prescott Fire Station 7 to a wildland fire 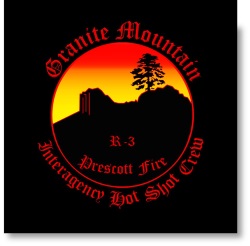 Nineteen of those men would never return. They were overrun by incredibly fast-moving flames and, despite having enough time to deploy their fire shelters, were killed in the firestorm.

The sole survivor was lookout Brendan McDonough. It was the greatest single LODD since 9/11.

On June 30, 2018, the City of Prescott memorialized the loss of the Granite Mountain Hotshots at a somber ceremony.

Article: No Exit, the GQ story of the incident, which was the basis for the film, “Only the Brave.”

A link to a previous Code 3 episode about the aftermath of the crew’s deaths.