On this episode, we learn about how a long-time firefighter turned his idea into a business.

Captain Geoffrey Giordano of the Stevenson Volunteer Fire Department in Connecticut saw a need for a better kind of paging system. So he invented the Real-time Volunteer Emergency Response System.

It’s known as ROVER, and it’s a solution for keeping track of volunteer resources that are available to go on runs.

Find out what convinced him to develop the system and how it works. 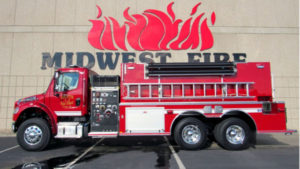 We also have a 14-year saga of grant writing.

If you’ve ever tried it, you know it’s an art.

In Dante, South Dakota, they’ve been trying to replace a 1967 water tender for well over a decade, and even that truck was converted from something else.

It’s the first new apparatus the department has owned in 70 years.