He’s been “on the job” in the fire service for 18 years. In this podcast, we addressed a few topics, and the most critical was Post-Traumatic Stress Disorder in firefighters.

The NFPA Journal said, in a story titled “Trouble in Mind:”

What is known is that that the nature of the job has changed dramatically in recent decades … The risks faced by emergency responders are more varied than they’ve ever been. 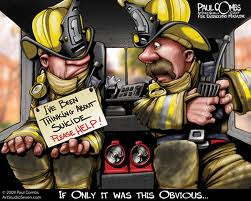 With those risks comes emotional stress. Firefighters have historically been reluctant to talk about those stresses, in part out of fear that they could be stigmatized as weak or vulnerable. While they may consider talking to peers about these kinds of problems, many emergency responders maintain an almost perverse aversion to therapists or other “outside” professionals who, some responders believe, understand neither the work nor the stresses they face.

While some observers … see signs that the stigma is declining, anecdotal accounts suggest it remains pervasive in the macho, male-dominated culture of the American fire service. Emergency responders pride themselves on being a tightly knit brotherhood that works together in dangerous environments, relying on each other for survival. Individuals with that kind of bias for action may be unwilling or unable to step out of their comfort zone and ask ‘What’s going on with you?’ when a colleague withdraws or fails to respond to questions or concerns.

King talks about the need for those with PTSD to put their pride aside and get help.