By now, as I record this show on April 6, 2020, most of this nation’s fire departments are now dealing with the devastating effects of COVID-19.

But if you think your department’s been hit hard, be glad you’re not in New York City.

The FDNY is dealing with an enormous number of deaths among citizens, so many that they no longer transport patients in cardiac arrest unless they can get a pulse in the field.

The radio calls for 10-37s—dead bodies—are frequent. Constant. Twelve an hour, by some accounts.

Amid all this, nearly 2,000 FDNY personnel are also suspected to be infected. About 400 are confirmed. That number grows daily. 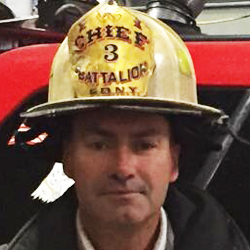 Joining me to give us some perspective is FDNY Battalion Chief Danny Sheridan.

He is a 34-year veteran of the FDNY, and a member of the FDNY IMT as well as a well-known instructor nationally. He’s also a lead instructor with Mutual Aid Training Group which works to train firefighters in Latin America.

An article by FDNY BC Simon Ressner in Brooklyn: “Dead on Arrival”: A N.Y. Fire Chief’s COVID Journal

Previous Post: 31 Seconds from Arrival to Water on the Fire with Jonathan Hall
Next Post: Lines Off, Ladders Up with Ty Wheeler