If you’re a structural firefighter, you’d probably rather not deal with wildland fires at all.

That’s normally not really a problem, until the flames reach the wildland-urban interface, which is happening much more frequently than in the past.

Then you guys from the cities need to know stuff like the 18 Watch-Outs. Or to be ready to go on a run that lasts 12 hours.

Decades ago, city firefighters didn’t have to be concerned with this.

Welcome to the New Normal. 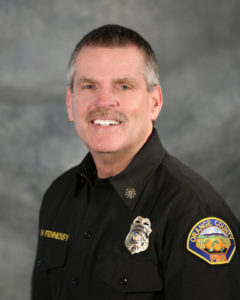 Here to discuss that with me is Brian Fennessy.

Brian is the chief of the Orange County, California Fire Authority, where he’s been since 2018.

He began his fire service career in 1978, working as a hotshot crewmember with the U.S. Forest Service, working his way up to crew superintendent.

In 1990, Fennessy joined the San Diego Fire-Rescue Department and became chief of that department in 2015.

He has held multiple Incident Command System certifications and positions, and has also served on National Incident Management Teams.