Training is the key to knowing how to fight fires, especially when your department doesn’t respond to frequent real-world structure fires.

It’s also the way to make sure no one gets hurt.

But there’s a right way to train and a whole lot of wrong ways, according to my guest on this show.

He’s here to tell us how training goes wrong and how it can be more realistic. 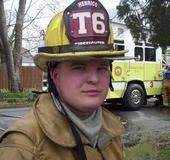 Robby Owens has been a firefighter for over 20 years. He’s a captain in the Henrico County, Virginia, Division of Fire. He’s taught classes at FDIC and Firehouse Expo.

His career started when he was 15 years old as a volunteer.

Trivia question:
What piece of apparatus is Daniel Hayes credited with inventing?

Previous Post: Minimizing Risks and Making Choices with David Cain
Next Post: Being the Senior Man with Casey Clinkscales